They Had No Idea…

They Had No Idea What They Were In Store For 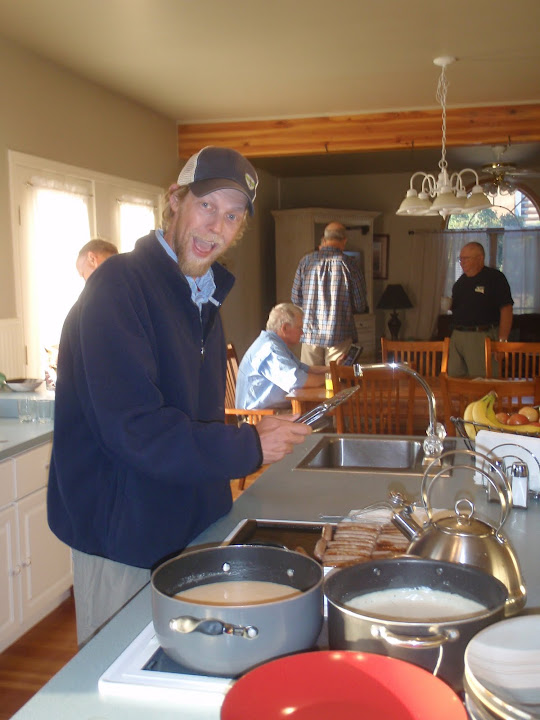 So I predicted that there would be several sore lips handed out, oh was I right.  We started of the day with biscuits and gravy, sausage, and eggs. It was more than enough to get our engines going and get us on the road to battle with some of our favorite opposition – Brook Trout. 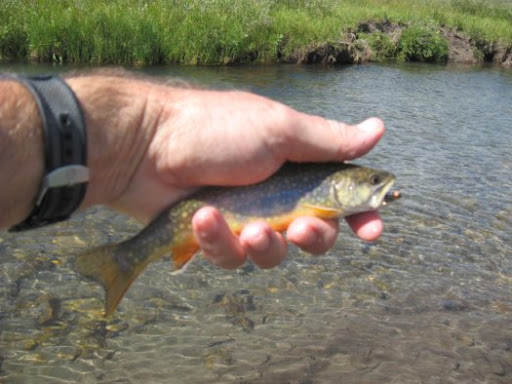 We split up in groups, with most of the groups staying on the Gardiner but in different areas. 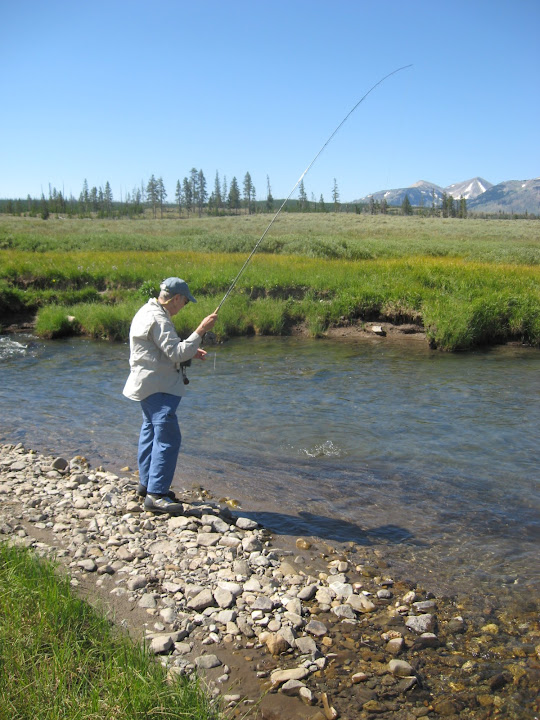 Some went to the Gardner meadows,… 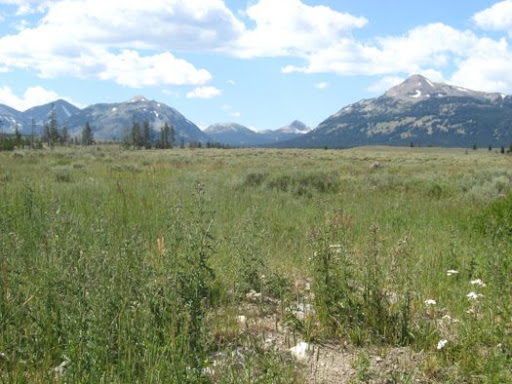 …some went to the lower Gardner,… 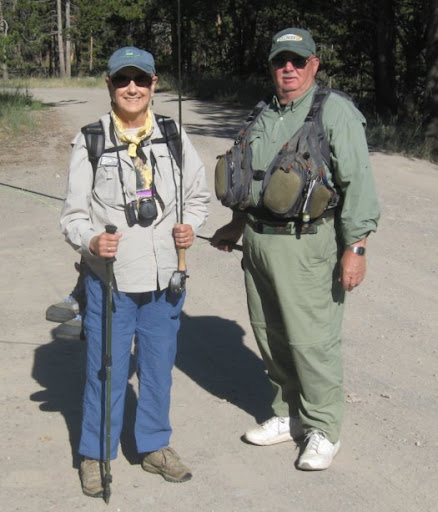 and some more went to the Gardner hole. 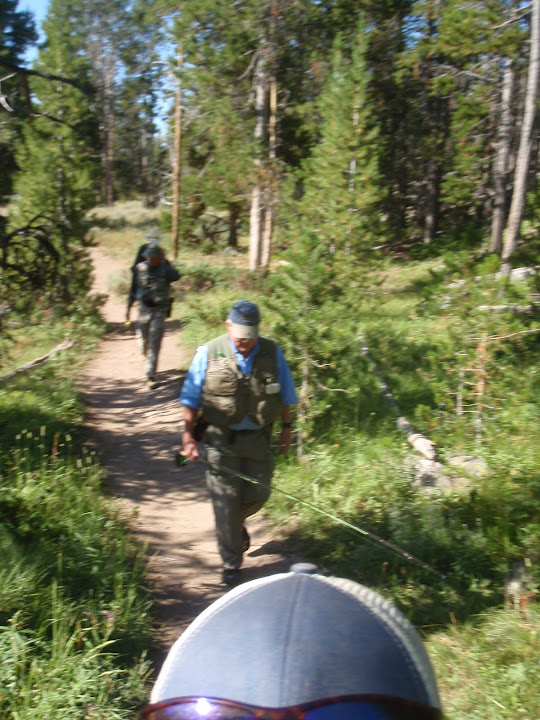 One totally separate group decided to make the trek into the second meadow of Slough Creek. 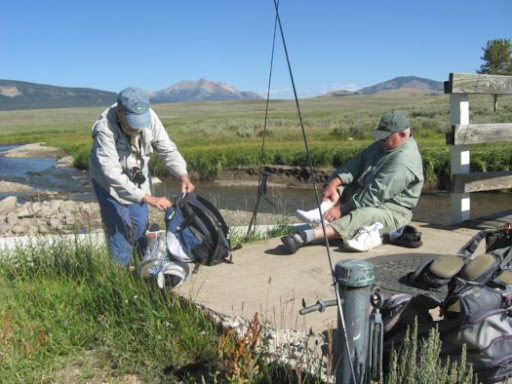 For Beth and Dick Heald, and Jeff the Gardiner hole is jump off point. 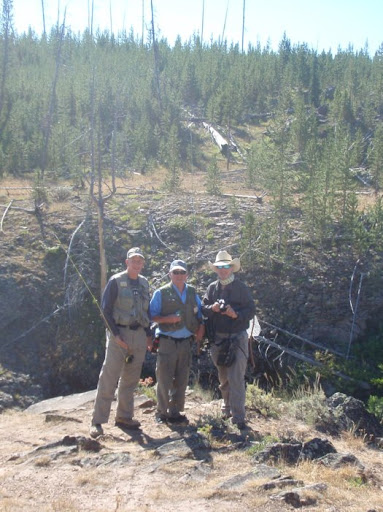 For John, Ralph, Richard, and myself we were going to take a short hike to the Gardner below Sheapeater Cliff. 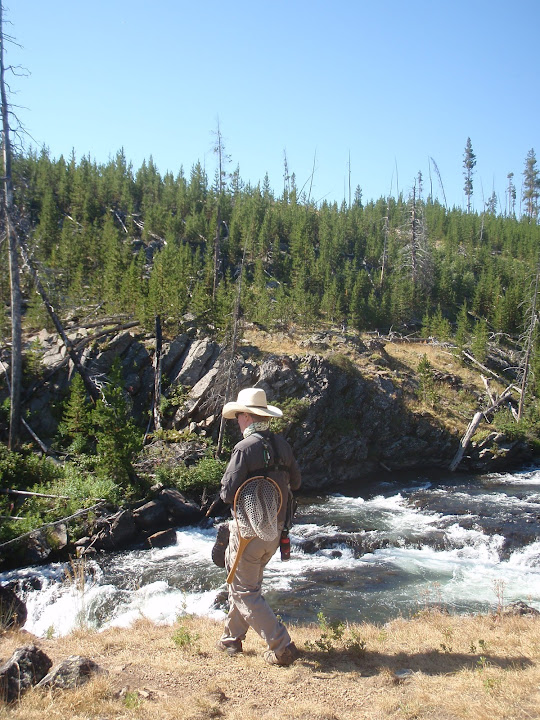 Bob, Chris, and Dick S decided to start above Boiling River.  Everybody was into fish almost immediately upon arrival. 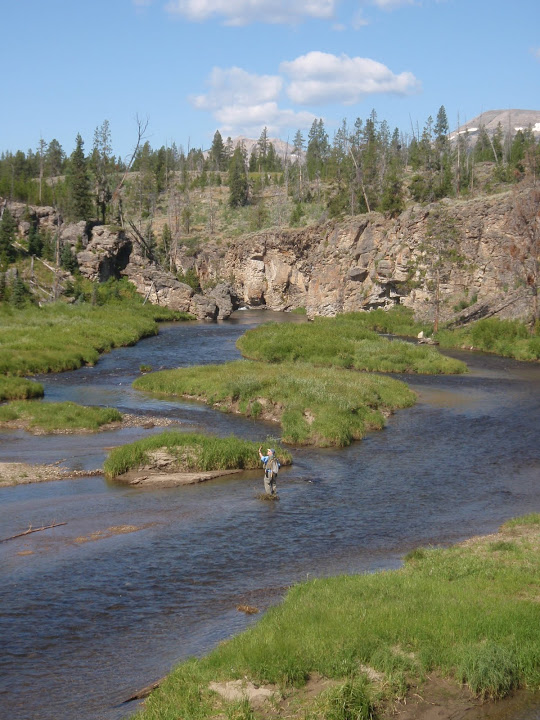 Some people caught more than they did the day before in five minutes.

Dry flies were mostly in order. Not to say we didn’t drag in several on nymphs, but they were all over the dries. 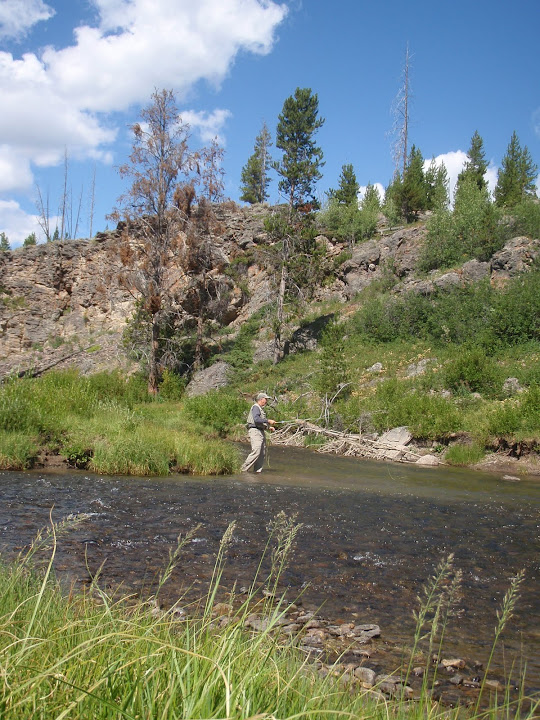 The fish targeted to day in the upper section were exclusively brookies. 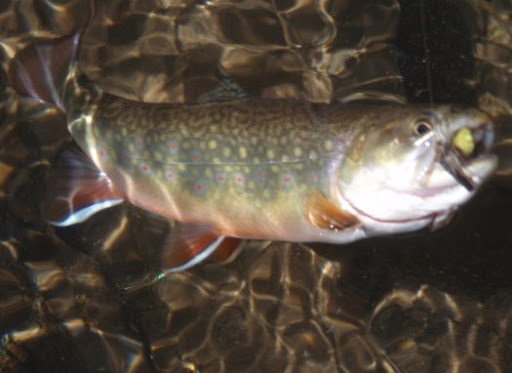 The middle gave up a few Rainbows but brookies were there in numbers. 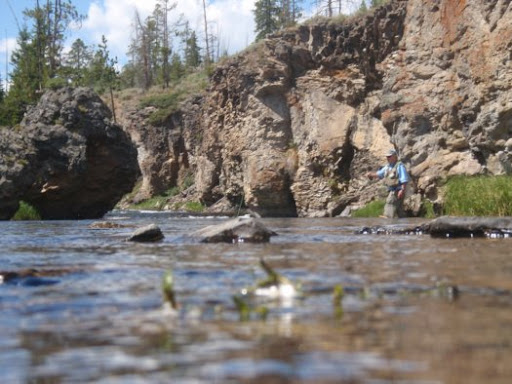 In the lower section all four of Yellowstone’s river trout are a possibility. 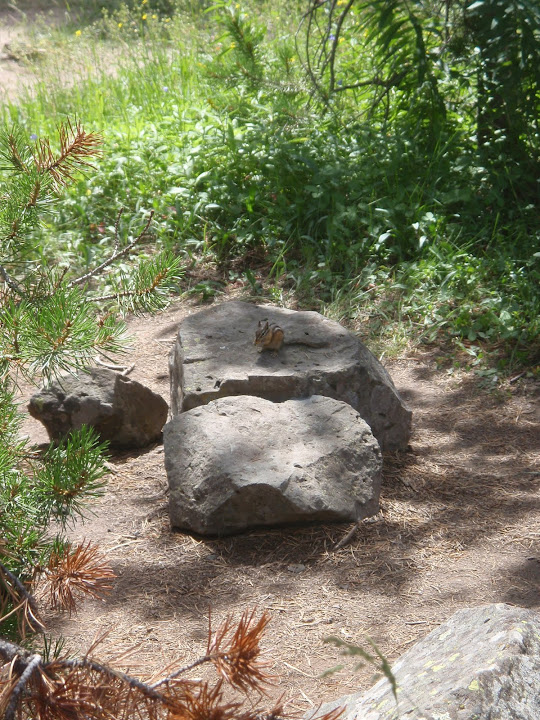 After a morning full of catching we by chance ran into everyone at the picnic area, including the squirrel,… 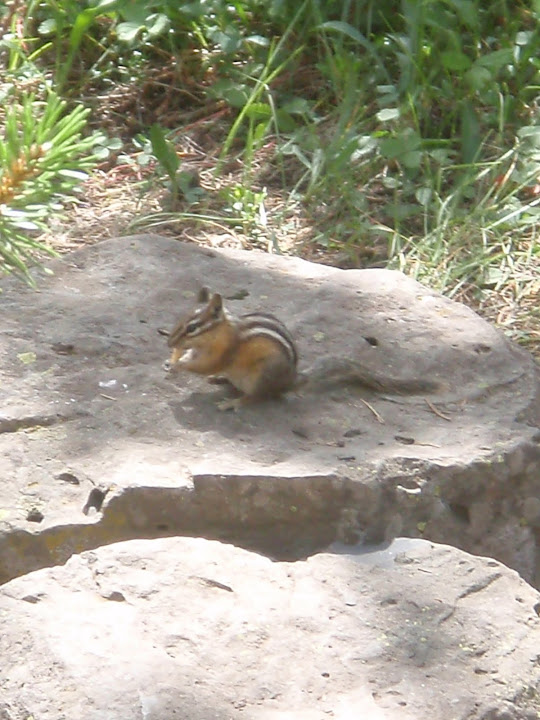 …and find out everyone had had a great morning. 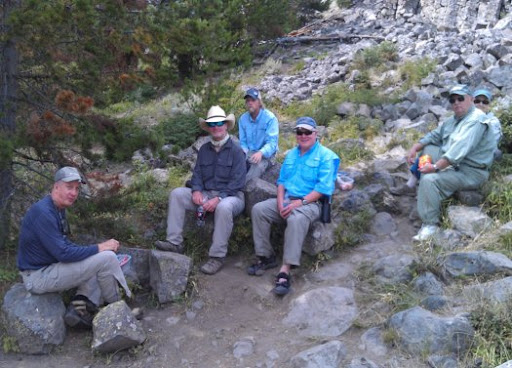 We exchanged our stories, only slightly exaggerated of course, then we were off to fish different sections. 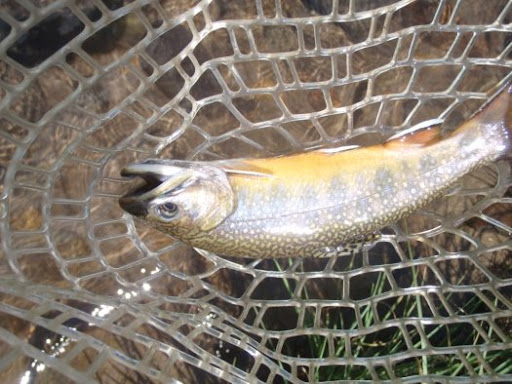 It turns out every one’s morning, was matched with their afternoon because the catching continued. 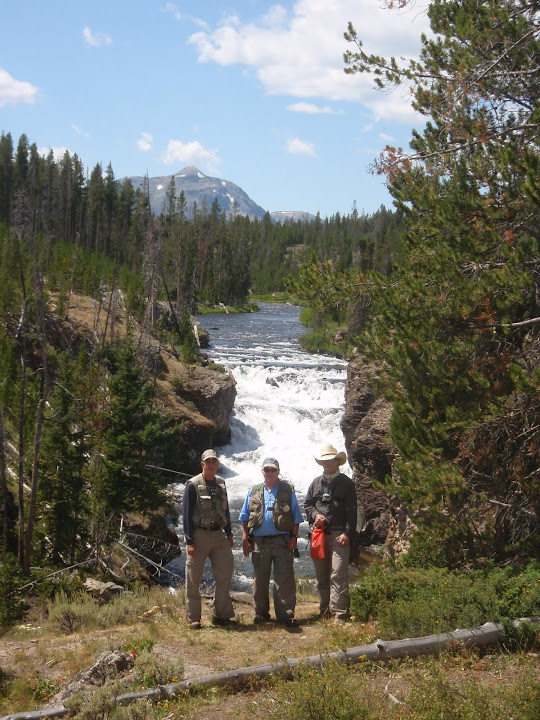 There is no telling how many fish were landed to day. 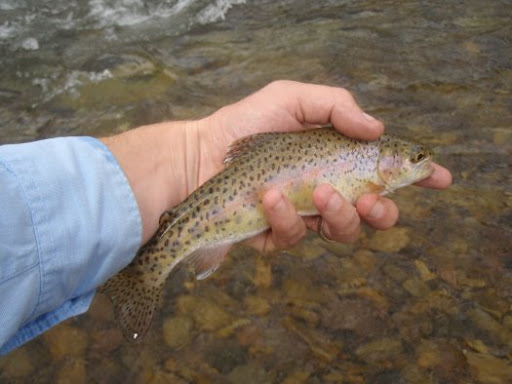 Needless to say not only where sore lips handed out there might have been a few sore arms received. 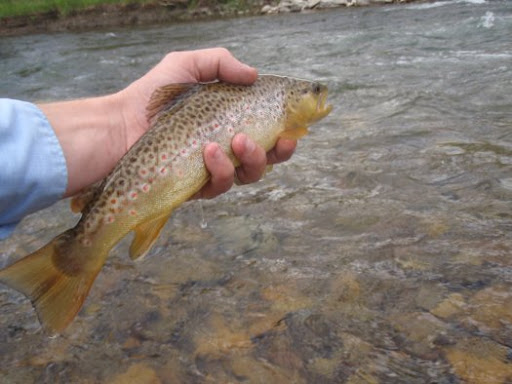 When the Slough group arrived back we found out they had some mixed luck. 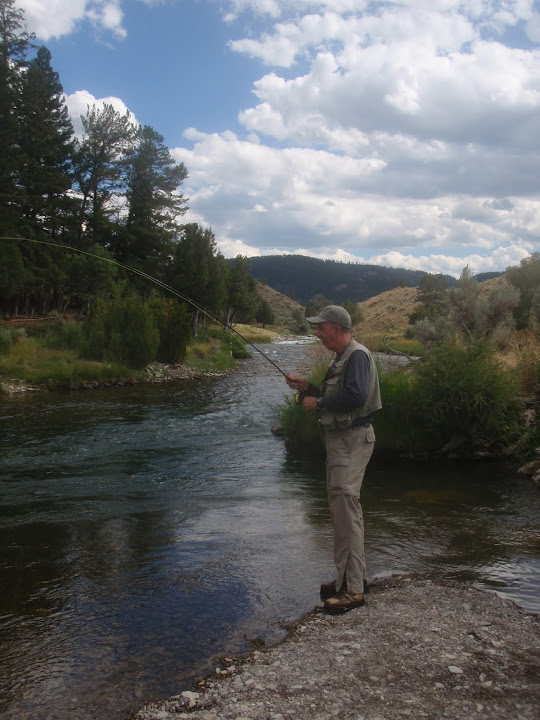 But several nice fish were brought to the net. 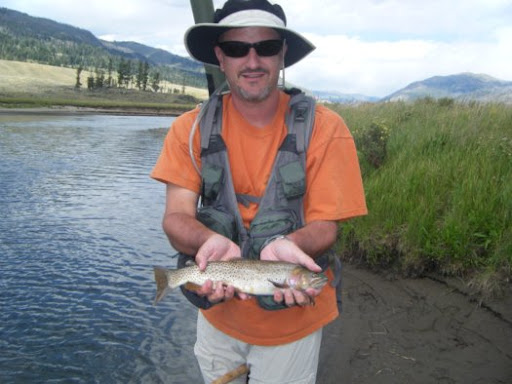 Hoppers and ants where the ticket. 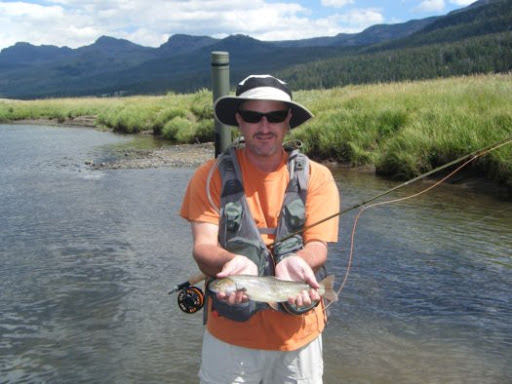 We sat around and laughed and talked about tomorrow’s guide trips. Several of the guys will be floating the Yellowstone tomorrow, and one other group will be headed into the woods. There will be one other group heading into the 2nd meadow of Slough to give it a go! Check in tomorrow on to see how everyone fairs.